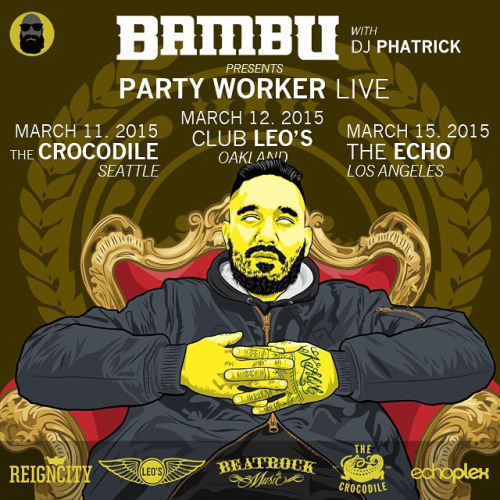 Another weekend, another show! This Sunday, I’m excited to experience PARTY WORKER LIVE at The Echo featuring this week’s artist on THE SET UP:

After recently supporting Brother Ali on the Home Away From Home Tour, PARTY WORKER LIVE is Bambu's first US headlining tour in celebration of his Kickstarter funded album, PARTY WORKER.  As a contributor to the campaign, I cannot wait to see some of these tracks performed! Just imagining "Welcome To The Party" live already puts them goosebumps on my face!

"With a catalog of music stretching the span of ten-years, the Los Angeles emcee has allowed his fans to witness the growth of a gracefully honest artist, who truly embodies the sentiment of the people." (FB)  An artist, organizer, father, Filipino American, a champion of the people, Bambu is the real deal.

Joining Bambu on this tour is Chinese American Dj Phatrick, or what I'd like to call him, The People's DJ. "Whether in the classroom or club, studio or streets, DJ Phatrick operates under the firm conviction of using music as a tool for community building and social change." (FB)

Also included in this show's lineup is Rocky Rivera! I actually recall watching her when she was on MTV’s 2007 docu-series “I’m From Rolling Stone," which she won. It was such a great moment for Filipino Americans and Asian Americans, seeing one of their own make it big. But a few years later, she put down the music journalist hat and focused on perfecting her other passion as an MC. And the rest is history! "Think Lauryn Hill meets Public Enemy with West Coast beats," as it says on her artist page. All I know is that Rocky Rivera is gonna kill it on stage and I can't wait to be witness!

If you were to ask me to name an MC to carry the Hip Hop torch for the next generation, I would easily nominate Klassy. Philippines born, but Los Angeles raised, Klassy has so much potential to become an unstoppable, creative force and voice. And did I mention that she's only 18!

Meet DJ Roza, often associated as Rocky Rivera's dj, but an artist in her own right. I am excited because I am not only supporting her as a fan, but as an old acquaintance. I specifically remember a time when we all kicked it and exchanged dj stories in Berkeley, California with my boys DJ Verz and DJ Presto. It's always special to see someone from your past achieving such success with their obvious talent.

Next up is Irie Eyez, a talented MC who was featured on a couple Rocky Rivera tracks. Unfortunately, I couldn't dig up much info on her, but what I do know is that when her and Rocky Rivera are on stage, they are gonna rock the shit out of us in the crowd!

Last, but not least, is Faith Santilla. Formerly of the Balagtasan Collective, Faith is an accomplished spoken word artist, unionist, and important community organizer.

With this unbelievable all-star lineup, I know it's gonna be a show for the books! So for all my fellow Angelenos and students of Hip Hop, come join us and be part of history!